Begin typing your search above and press return to search. Press Esc to cancel.

I took my oldest son (Will) to Detroit on Thursday for what was supposed to be an afternoon contest against Minnesota.  Due to all of the rain, the game didn’t begin until about 4:00pm.  Cloudy, windy rainy conditions until the rain finally let up.

Comerica Park is beautiful. Not a bad seat in the house.  Everyone is close, the workers were great, cool stuff to look at everywhere.  I thought that the food was a little disappointing.  Nothing great. Pretty expensive, but, that’s what happens in a  major league park.  $9.50 for a beer?  Hey, it’s only money right?  The Tigers got great pitching and timely hitting as they completed a three game sweep of the Minnesota Twins in a 7-to-1 victory.

I had a great time with my oldest son Will.  I think when this photo was taken, we had been freezing for about four hours and were ready for the game to get underway and we were pretty worn out at that point, but it was great spending some quality time with him.  I listened to hard core music all the way home, trying to be cool. 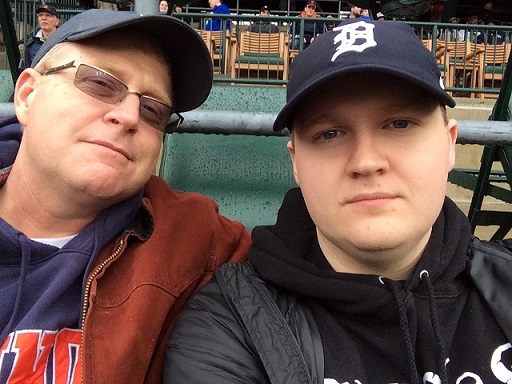